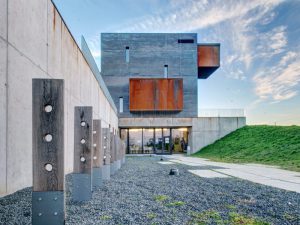 Celldömölk is located not far from our apartment at the foot of Mount-Ság. This mountain is the rest of a volcano erupted 5 million years ago. Archaeological excavations have shown that even in Roman times this territory was inhabited and cultivated. The crater of the volcano itself is worth a trip, which is made more luring by the Sághegyi Museum and the geological and ornithological study path. In 2005 also the crater of the mountain served as the site of the fantasy film Eragon, some scenes of the film were shot here. The film was made by the 20th Century Fox. The settings for the shooting could be visited in the crater for a long time. Ság-Mount as a nature phenomenon was an excellent base to realise an innovative project; the Kemenes Vulkánpark. Within the scope of the project a museum was built that introduces the 4-6 million-year-old natural and volcanic value of Kemenesalja. The museum is an educational-, entertaining- and scientific centre. In the central museum there is a stone park and a playground. The above mentioned educational path was also done up within the scope of the project. In the uniquely designed building there are interactive exhibitions in different tellingly named halls, for example in the Verne-cubicle we can have a visual trip into the centre of the Earth or in the Volcano-theatre you can see how the volcanic eruption looks like. In the Explorer-room you can play on your own and in the “Tűzhányó” and Volcano horror rooms it is introduced how a volcano works and what destruction it can cause. This Vulkánpark will probably attract thousands of tourists not only form our country but from Europa as well. We must not forget that this territory is a historic wine-growing region. Already the Romans dealt with viticulture and this tradition is still kept alive. Thus on the mountain you can find several wine yards and wine cellars. When we talk about wine we would like to draw your attention to an excellent opportunity. On the eastern side of the mountain you are welcome in Auntie Vali’s wine cellar, preliminary booking is necessary. She welcomes all the guests who are interested in viticulture, wine-tasting and village-tourism. When visiting this wine cellar each generation can have real experiences. Auntie Vali offers the guests “langosh”, scones, home-made jam and home-squash and last but not least with wine tasting. The wine-cellar can be reached by bike, car or on foot easily. Children can play here perfectly and there is a parking place as well. Since the host has got long viticulture experience and she is very hospitable she likes talking to visitors. It is highly recommended getting to know her and her delicacies and drinks.
Celldömölk, the town nearby has been enormously innovated for the past years; naturally the old sights play also an important role beside these innovations. The centre squares, the fountains and the church square are beautiful. The in the years around 1700 built Virgin Maria Catholic Church, the Benedict Closter, the Calvinist Church and the in 2010 finished council house all invite us for a walk. 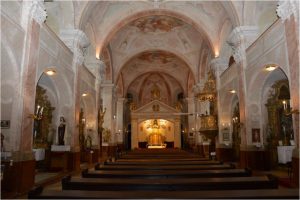 The church consecrated in honour of Virgin Maria is situated in the centre of Celldömölk, in the direct neighbourhood of the building of the Benedict Closter and the Kalvarie and the statue of the Holy Trinity. The church is 50 m long and 11 m broad, it has got a cross ground-plan and at its frontage there are two 40m high towers.
The main altar can be found in the middle of the nave in a chapel-like chamber.  The miraculous statue was placed above this. In front of the altar there are two enormous angel statues. Behind the chapel Saint Stephan’s altar is located with a Virgin Maria’s statue. The altar picture depicts Saint Imre, Saint Stephan and Merry Gizella. The Baroque frescoes were painted by István Dorffmeister in 1774. The furniture of the church comes from the 18th century too. Its organ comes from 1833. On each side of the church six chapels were built, the stations of which were prepared by Antal Borsa in 1942. The ceiling frescoes were painted by him as well. There are services in the church at the following times: Monday- Saturday: 7:30, 18:00     Sunday: 9:30, 11:00, 18:00 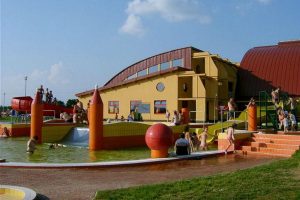 Celldömölk has got a Health and Wellness Bath as well to which a four-star hotel is being built now. If you visit this bath as well then it is worth spending a whole day here in this town. If you liked only to go on a trip on Mount-Ság or to walk around in the city centre, then half a day will do. 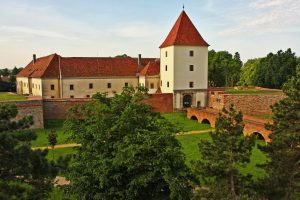 The town, Sárvár can be found 18km far from Mesteri. This town owns several sights as well. Its main attraction is the Nádasdy-Castle, which was first documented in the years around 1200. The castle could have been at the beginning an earthen castle surrounded by muds. Throughout the years it was owned by several aristocrats, the most significant was Tamás Nádasdy, who the castle is named after today. In the former moat of the old castle there is a beautiful park now where you can take a relaxing walk. Beside the castle there is an arboretum.

Sárvár’s further sights are the churches, the council house, the fountain in front of the council house, Széchenyi Street, which functions as a pedestrian zone as well and a boating lake. The lake is a lake-system of four different lakes, which is made by five bridges and 5 islands fascinating. It is a perfect choice for a walk, fishing, and riding a boat. In Sárvár there is a Health- and Wellness Bath as well. It lures the guests with its 3600 square metre water surface and several programmes. In summer the bath is quite crowded, so it can be recommended the people who like active and busy beach life. To walk around the sights of Sárvár a half day would do, but if you liked to have a go at the slides and wonder equipment in Sárvár Bath, then it is worth spending a day there. 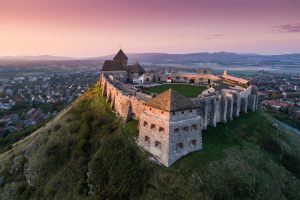 If you take a holiday in Mesteri, it is really worth visiting Sümeg as well. You can see here the castle of Sümeg, which is the biggest medieval castle of the country. It is preserved in a very good condition. The castle was probably built in the middle of around 1200. It was owned by several rulers. It was enlarged and made more beautiful continuously. But in the years 1700 its condition began to decay and it stood neglected for two decades. At least the local council sold it under strict conditions of protection of historic buildings. Since then the building has begun to flourish, it is being improved constantly. In summer there are several programmes (fairs, knight tournaments, …) organized and it is the scene of different exhibitions too.
If you travel to Sümeg, you should not stop, since Lake Balaton is not far from here. Coming from Sümeg Keszthely and the settlements nearby can be reached easily. 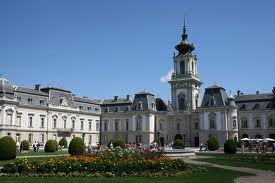 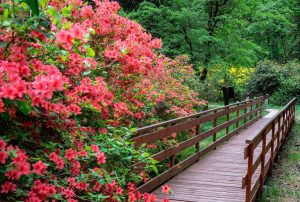 In the neighbourhood of Mesteri it is worth mentioning Kám, where there is the Arboretum of Jeli, which homes the hugest tree collection of West Transdanubien. The visitors here can enjoy the fresh air, the beautiful scenery and a pleasant walk. The arboretum is the most beautiful in May and June, when the most magnificent sights, the rhododendrons bloom. To this time of the year the area can be visited every day. Before that (in April) and after that (from July to September) the park is only open for the weekend. 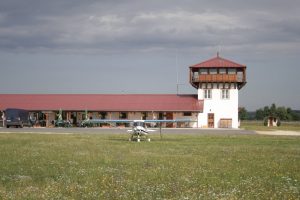 You can find the Aero-Ság airport 7 km far from Mesteri, in Tokorcs. It brought significant boom in the tourism of the village, since it lures the people who would like to try circular-flight and learn how to fly an airplane. Every year there is a famous air-display at Whitsun. The guests can take a round flight booked in advance. 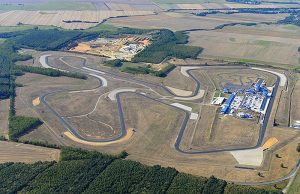 The Pannonia- Ring one of the safest car and motorbike racing tracks of Hungary. The track is at Ostffyasszonyfa. It can be easily reached from both Sárvár and Celldömölk. From Mesteri it can be reached through Nagysimonyi and Sitke, in this way we can get to the Pannonia-Ring in 15 minutes. The 4740 m long track is an interesting sight as well, standing on the roof of the central building you can see the route of the races and during races you can be one of the viewers thus you can experience exciting and adrenaline increasing minutes. The Ring is equipped with modern infrastructure: a medical station, electronic timing, a petrol station, fast service, tyre service, a motorbike saloon, a restaurant, a 300 square metre big main building, a go-cart and super-motor track, a helicopter landing strip, a motel, and a sanitary belong to it.